The Ministry of External Affairs (MEA) on Friday said over 20,000 Indians have left the Ukraine borders since the day the first advisory was issued by India due to Russia’s military aggression against Ukraine. MEA spokesperson Arindam Bagchi said 16 flights are scheduled for evacuation of stranded Indians in the next 24 hours.
Meanwhile, three Ukrainian soldiers were killed in shelling by Russian forces on the Zaporizhia Nuclear Read More
Key Events
Russia has blocked Facebook inside the country amid war with Ukraine, reported AFP news agency.
India accords the highest priority to the discharge by the IAEA of its safeguards and monitoring activities, in accordance with its Statute in an effective, non-discriminatory and efficient manner: India’s representative to UN TS Tirumurti at UNSC meeting after Russian nuclear power plant attack
We continue to carefully follow developments regarding safety of Ukraine’s nuclear power reactors and facilities. India attaches highest importance to ensuring safety and security of nuclear facilities as any accident involving the nuclear facilities may have severe consequences: India’s representative to UN TS Tirumurti
Russian UN envoy says ‘untrue’ Russian military shelled nuclear power plant, reports AFP news agency.
The Group of Seven (G7) have urged Russia to stop attacks near Ukraine nuclear plants, a statement said, reports AFP, as it called for ‘rapid’ humanitarian corridors in Ukraine.
EU Chief Ursula von der Leyen said EU is ready to adopt more sanctions against Russia if war against Ukraine doesn’t stop, reports AFP news agency.
A Russian air strike on a rural residential area in Kyiv region killed at least seven people on Friday, including two children, Ukraine state police said in a statement, reported Reuters. Police said the strike hit the village of Markhalivka, around 10 kilometres (6 miles) from the southwestern outskirts of the capital.
Indian students stranded in Ukraine get evacuated by Indian authorities at Pesochin. 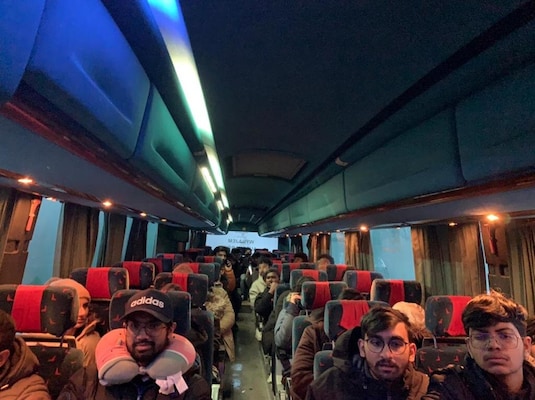 A member of the Territorial Defence Forces stands guard at a checkpoint, as Russia’s invasion of Ukraine continues, in Kyiv. REUTERS/Mykola Tymchenko 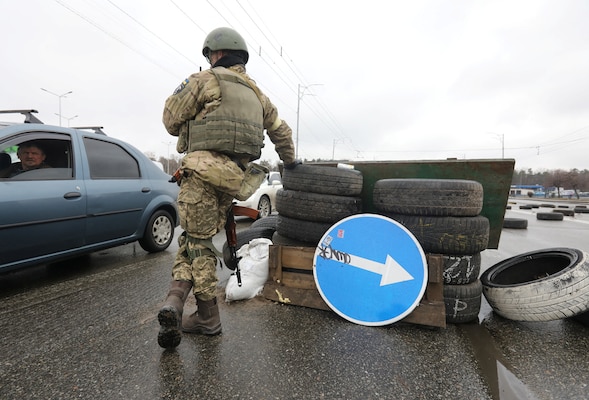 Ukrainian foreign minister Dmytro Kuleba called on Russian troops to stop attacking Europe’s largest nuclear power plant on Friday after a fire broke out. “If it blows up, it will be 10 times larger than Chornobyl! Russians must IMMEDIATELY cease the fire,” Kuleba tweeted.
Meanwhile, the EU on Thursday agreed to approve temporary protection for refugees fleeing the war in Ukraine — so far numbered at one million — while also setting up a humanitarian hub in Romania. The moves by the European Union came in parallel to its sanctions on Russia imposed in successive waves over the course of the invasion, now in its eighth day.
In Washington, the administration of President Joe Biden announced a similar move, granting temporary protected status to Ukrainians already in the country. That means they can remain in the US and the threat of deportation is lifted. EU interior ministers agreed in a Brussels meeting to activate a temporary protection mechanism drawn up two decades ago — in response to the wars in the former Yugoslavia — but never used.
European home affairs commissioner Ylva Johansson, who attended the meeting, tweeted that it was a “historic decision”. French Interior Minister Gerald Darmanin said: “The European Union will accord temporary protection to all those fleeing the war in Ukraine.” Both later told a media conference that the decision was unanimously taken by the ministers representing the EU’s 27 nations.
Darmanin said the temporary protection would apply to Ukrainians and their family members crossing into the EU, as well as anyone who had prior refugee status in Ukraine. Johansson said there were many foreigners, including students, who had been in Ukraine when the Russian assault started, and stated: “They are not covered by Temporary Protection directives, but they are being helped out of Ukraine.”
“The significance of this moment for Europe cannot be underestimated,” the Oxfam charity said in a statement of the EU’s decision, calling it “a turning point for Europe”. It said the EU protection mechanism “offers a direct lifeline to people fleeing from danger in Ukraine” and now “all EU member states need to chip in and take responsibility”. With political agreement reached, it was expected to come into force within days, once the EU legislation is finalised.
The protection allows refugees from Ukraine and their family members to receive a residence permit and the right to access work and education for an initial year, renewable every six months for a total of two years. Currently, Ukrainians with passports bearing biometric data have only the right to visit the EU’s Schengen area for up to three months, without the right to work, meaning they can already enter the EU.
German Interior Minister Nancy Faeser said as she arrived for the meeting that adopting the blanket protection for Ukraine refugees was “a paradigm shift” for the EU, which has long struggled to reform its asylum rules. Hungary’s government — which has the closest ties to Moscow of any EU country — had said opposed the blanket EU protection measure, according to a media conference by Prime Minister Viktor Orban’s cabinet chief Gergely Gulyas.
But, according to Darmanin and Johansson, that opposition was dropped and all 27 EU countries backed it. As the interior ministers met on Thursday, European Commission chief Ursula von der Leyen tweeted that the EU was also setting up a “humanitarian hub” in Romania, one of four EU countries bordering Ukraine. “Protecting the people fleeing (Russian President Vladimir) Putin’s bombs is not only an act of compassion in times of war. This is also our moral duty, as Europeans,” she said.
(with inputs from wires)
Read all the Latest News, Breaking News and Assembly Elections Live Updates here.
TAGS
Follow us on
Download News18 App