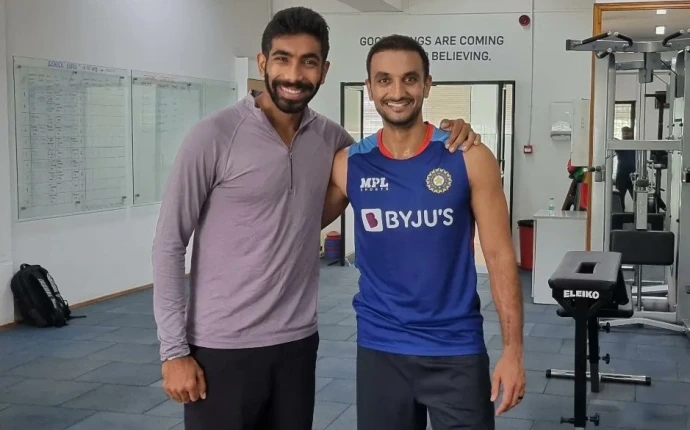 The BCCI is reportedly set to pick the Indian T20 World Cup 2022 squad on September 16 as they still don’t have clarity over the fitness of ace pacer Jasprit Bumrah. The deadline to pick the squad is nearing as team management tries to finalize its 15-member squad.
Bumrah has been out of action since the England tour in July due to a back injury. Harshal Patel is also recovering from a rib injury.
“Bumrah has not been declared fit yet. He is going to be at the NCA this week before the selection. The World Cup is still over a month away. Therefore, his selection will happen considering that,” a BCCI source told Times Of India.
T20 World Cup 2022: ICC announces schedule for warmup matches; India to play Australia and New Zealand in Brisbane
India head coach Rahul Dravid said that both Bumrah and Harshal walk into the Indian team when they regain full fitness, but remains to be seen how the team management handles the two pacers from here on.
Jasprit Bumrah was generous enough to spare time and share his wisdom and experiences with the Under-19 boys at the NCA. A perfect role model, humble and passionate, I am sure he will have made a strong impression on the future hopefuls of Indian cricket. @BCCI #NCA pic.twitter.com/wabTGy3mv6
India is slated to play six T20Is against Australia and South Africa at home and in all likelihood, most of the players picked for the World Cup are going to play in those matches to get the team gelled together and ready for the ICC event in Australia which begins from October 16.
According to sources, the key would be to get match fitness for Bumrah. How many matches he plays over the next month will be interesting. The team would want Bumrah bowling at full tilt at the World Cup and then it also doesn’t want to push him in the lead-up.
BCCI fumes as Ravindra Jadeja’s freak knee injury was avoidable; to miss T20 World Cup 2022- Report
Though India has a good bench strength, poor selection led to the pace attack lacking a bite in the recent Asia Cup as only thee frontline fast bowlers were chosen in Bhuvneshwar Kumar, Avesh Khan, and Arshdeep Singh, while Deepak Chahar was named as a reserve and Mohammad Shami has been ignored for T20Is since the last T20 World Cup.
Not long ago, I was on the other side, learning, observing and grasping everything I could. Which is why it means a lot to me to be able to use the knowledge I have today to help youngsters along the way. pic.twitter.com/T5cx13WWKo
Captain Rohit Sharma had to depend on spinners Yuzvendra Chahal and Ravichandran Ashwin to look for wickets. Bhuvneshwar Kumar went for runs in the death overs, potentially causing India to lose two matches in the super 4s stage and be eliminated from the tournament as well.
However, Deepak Chahar’s return to the Indian team has been good news for the team management. But with so little time left for the ICC event, the selectors might need to fall back on the experience of Shami.
(TOI report)
By Jatin Sharma – 09 Sep, 2022
Asia Cup 2022: AB de Villiers’ unusual Instagram post leaves Virat Kohli and Anushka Sharma stunned
BCCI fumes as Ravindra Jadeja’s freak knee injury was avoidable; to miss T20 World Cup 2022- Report
Asia Cup 2022: WATCH – ‘Sab control mein hai?”- Rishabh asks Karthik after he gets hit for two sixes