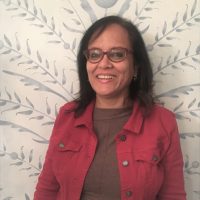 By Ishani Duttagupta 27 June, 2022
Growing up in Rewa, a small town in central India known for its white tigers, Srishti Sahu always dreamt of becoming the first engineer in her family. But within couple of years in the local college, she realized getting an engineering degree alone won’t cut it.
“I had set my sights on finding a job in the tech industry right after graduation, but our university curriculum did not include industry focused skills,” Sahu says.
Her experience isn’t an isolated one.
According to industry estimates, nearly 1.5 million engineering students graduate in India every year, one of the highest in the world. However, only a small fraction of them find employment. Job opportunities dwindle further as one moves away from prestigious engineering colleges to those in the country’s hinterlands, like the one where Sahu is enrolled. Now TechSaksham, a joint initiative by Microsoft India and SAP in India, aims to address this gap by training aspiring women engineers like Sahu in relevant technology and future skills to help find them employment. TechSaksham loosely translates from Hindi to ‘Tech Capable.’
TechSaksham imparts skills around key technologies to accelerate women’s workplace participation in the digital economy. As a part of the initiative, courses are offered in the disciplines of web designing and digital marketing, cloud computing, and artificial intelligence (AI). They’re available to women students studying bachelors and masters’ courses in technology at government and government-aided colleges in their junior and senior years.
Manju Dhasmana, regional director-MEA, Microsoft, and one of the architects of the initiative, considers TechSaksham to be a movement to connect young women from rural areas and small towns with job opportunities in cutting edge technologies of the future.
“We’re excited to become the catalysts to help young women acquire the skills needed to join top technology jobs in India which have not slowed down despite the pandemic,” she says. “The aim is to democratize access to skilling for women from smaller towns to make careers in technology. Currently, the job market is focused on a select group of top institutions in big cities.”
For Gunjan Patel, the regional director and head of CSR at SAP, Indian subcontinent, a reason to start such an initiative is also personal.
“Because my own experience of schooling was in a rural background in a government school, I faced some of the very same challenges that many students who are TechSaksham beneficiaries still face,” he says.
For Sahu, TechSaksham opened doors she never knew existed for someone like her. She signed up for the web development and digital marketing course, which provided her with training for front and back-end full-stack development, digital marketing, and helped hone skills that corporates seek beyond educational qualifications.
The online training schedule was rigorous, she says, but she logged in for the sessions in the morning before attending her regular college classes, which were also being held online because of the pandemic.
Her perseverance paid off and she now has a job offer as a consulting engineer from one of the ‘Big Four’ audit firms.
“What is relevant today may or may not be relevant after a couple of years. TechSaksham brings those skills for students, which will be necessary for them to perform their jobs,” explains Patel. S. Gunasundari is a senior year student in electronics and communication from the government engineering college in Thanjavur, in the southern state of Tamil Nadu. The IT services industry attracted her but picking up career-focused skills in software development, beyond her college curriculum, was a challenge with limited facilities available in her town.
“TechSaksham, which was introduced in my college in September 2021, was an opportunity to learn web development and digital marketing innovatively. The classes were very exciting—our trainers sent us the code which we would execute and output immediately,” she remembers.
There were trainers who helped with useful tips in communicating at formal meetings. She already has three job offers in hand even before she finishes college this July. That’s unheard of in her home, especially considering she’ll soon be the first college graduate in the family.
In less than a year since its rollout, TechSaksham has benefitted nearly 2,500 young women students directly in 43 government aided institutions across the states of Gujarat, Andhra Pradesh, Maharashtra, Madhya Pradesh, Delhi, Karnataka, and Tamil Nadu. With the help of Edunet Foundation, a non-profit organization that facilitates the initiative, 464 students from senior year have already been placed in jobs or internships.
As Dhasmana envisages, the initiative is not just about skilling but also enabling an ecosystem which includes state government engineering colleges, apex government organizations such as the Department of Technology and the All India Council for Technical Education (AICTE), faculty members from educational institutes, and partners such as Edunet Foundation.
So far over 1,200 teachers from 364 colleges across 24 states have also been successfully trained, who have further trained more than 10,500 students leading to have an even larger impact.
Recognizing the reality that many young women might not have the same opportunities as men to move cities to pursue their education, TechSaksham is also helping them get the skills locally in the tiny towns and villages where they have grown up. Hrishika Rai had an aptitude for mathematics and science in high school and decided to study engineering. She cleared several engineering entrance exams but eventually joined the government engineering college in her hometown of Dahod, a tiny town in the western state of Gujarat.
“During my sixth semester in college I studied web development but didn’t find the topic interesting. I was drawn to cloud computing and wanted a career in IT services rather than basic coding work,” she recalls.
Rai opted for the cloud computing stream offered by TechSaksham and quickly realized it could help change her career trajectory.
“The hands-on and in-depth domain knowledge that I was able to build had not been possible in my college curriculum. I worked with virtual machines, and I even created bot services,” she says.
A free subscription to Microsoft Azure that was part of the course was also a big advantage. Rai, who is now in her final semester in college, is interning as a cloud engineer with a Dubai-based company.
“What we learn in college is not always enough to become ready for the jobs market, TechSaksham was very useful to gain practical domain knowledge and to tap into internships and jobs,” she says.
Apart from training these engineering students, one of the aspects of TechSaksham is also to expose them to role models and mentors in the form of employee volunteers from both Microsoft and SAP.
“There is a lot of interest among employees at both the companies to provide mentorship to TechSaksham beneficiaries,” says Patel.
For Prajala HB, partner technical consultant at Microsoft India, volunteering for TechSaksham was a way to give back to women from communities that were quite similar to hers. When she got a job at Microsoft, her entire village celebrated along with her family, she recalls.
“I’m from a small village and studied engineering in a college in a small town. There was very little industry exposure for us and very few companies came to our campus for placements. I can personally relate to the girls who are the beneficiaries of TechSaksham,” she says.
Roohi Afza, a program manager at SAP in India, sees volunteering for TechSaksham as a two-way process—to demonstrate to the beneficiaries that a woman like them has a place in a managerial role in the tech industry but also to learn from them by being on the jury for technical demos.
While skilling is at the core of TechSaksham, it’s equally about showing these young women that if they’ve ambition, they can make their dreams come true.
On a recent visit to one of the colleges where the TechSaksham has been introduced, Dhasmana interacted with some of the young women who are the participants. Her takeaway: “We’re just opening a door for them; but they will change the world.”
From ‘magic water’ to digital twins, Microsoft is making its campuses in India more sustainable
Organizations need to secure innovations emerging from accelerated tech adoption: Vishal Salvi, Infosys
Inside Microsoft’s quest to build some of the most accessible workplaces in India
This non-profit is protecting vulnerable communities from the effects of climate change with AI
How a startup is transforming the lives of grocers in India’s villages with cloud and AI
How Devika Narain is making big fat Indian weddings more mindful
Follow us:
Share this page: